Last year was my first time at the Writers Police Academy and it was amazing.  I wasn’t sure what to expect this year, but there was no need to fear: the 2017 WPA was awesome.  Here’s why:

1. Road Tripping with Me, Myself, and I. When you drive by yourself, you can roll down the windows while you blare Whitesnake’s “Here I Go Again”:

“And here I go again on my own
Goin’ down the only road I’ve ever known,
Like a hobo I was born to walk alone”

Although with my hair blowing in the wind, I felt I was a little less “hobo” and a little more “Tawny Kitaen”.  But I digress.

2. Old and New Friends. That song we sang in Brownies said make new friends but keep the old so that’s what I did.  It was great to see my old buddies Shoshona Freedman, Savannah March, Tes Brown, Jim Bennetts, Josh Cejka, and Mike Riegel of the “Riegel Island” Riegels (sorry, inside joke).  Plus, I met some cool new people including Heather Wilson and Rebecca Faye Koss.

I lucked out and got an awesome roomie, Mia Manansala.  Mia and I are both having an excellent year; Mia recently won the William F. Deeck Malice Domestic grant and I found out the week before the WPA that I’d won the Sisters in Crime Eleanor Taylor Bland award.  We were ready to learn a lot at the Writers Police Academy and celebrate a little, too.

3. Sisters in Crime President Diane Vallere. It was a great honor to meet SinC President Diane Vallere at Thursday’s reception.  She was amazing and very down-to-earth.  I’d like to give a big shout-out to Sisters in Crime for sponsoring the Writers Police Academy, a great resource for both aspiring and seasoned writers.  Looking forward to seeing all of my Sisters at Bouchercon in October!

4. Craig Johnson. On Friday morning, I met Craig Johnson, the author of the Longmire series.  He was very friendly and offered up a great speech at the banquet on Saturday night.  It was interesting to hear about his career as a writer and his involvement in the Longmire television series.  Plus, he said “howdy” to me on Twitter and I almost fainted.

5. Shooting Range. I was fortunate enough to shoot both hand guns and long guns at this year’s academy.  I was incredibly impressed by our instructors who had a gentle touch with the people who were nervous about shooting.  They were also good eye candy (LOL).

6. Emergency Driving.  My instructor’s face after my emergency driving session is priceless.  He looks terrified.

7. Martial Arts for Writers. Our instructor, Esoma kung fu master, Howard Lewis, beat the crap out of me as he showed us how to defend ourselves from potential attackers and I liked it.  That is all. 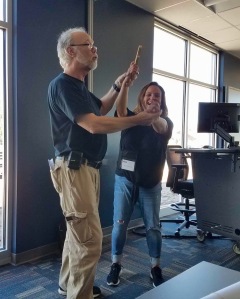 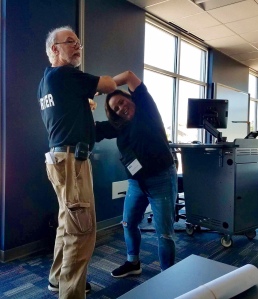 8. Gifts and Prizes. As an unexpected bonus, I was given a WPA mug and patch after Saturday’s banquet for referring my roommate, Mia, to this year’s academy which was cool.  Mia and I also purchased raffle tickets and Mia ended up winning two K-9 plush animals.  She graciously gave me the Mason the Retriever doll to take home as a gift for my son. 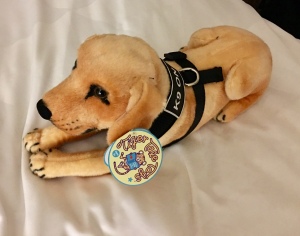 9. Purcell’s Lounge. There was drinking and music in the hotel bar each night after the academy wrapped up.  It was great to catch up with friends and hear about the classes others had taken.  On Saturday night, we let it all hang out and danced with our favorite dance partners, Colleen and Jill.  One memory I will take to my grave is when a grown-ass man ran out of the bar while screaming these words at me: “Fine!!  You’ve proved your point!!!”  I’m not sure what my “point” was (perhaps that I’m a good salsa dancer which I am) but in any case, I will not stop dancing next year until at least *two* grown-ass men run out of the bar screaming at the top of their lungs.  #goals

10. Kroll’s East. Before leaving Green Bay, Mia and I met up with another mystery writer, Julia Lightbody, at the famous Kroll’s East.  My dining companions, the spaghetti with chili, and the cherry shake were all wonderful.

Overall, I had another amazing year at the Writers Police Academy.  I learned a lot, partied a little, and came away with many great ideas for my work-in-progress, The Sundowner.  Special thanks to Lee and Denene Lofland and the instructors, staff, and volunteers at Northeast Technical College for all of their hard work and planning.  I can’t wait to see what will happen at next year’s academy!

Jessica Ellis Laine is the winner of the 2017 Sisters in Crime Eleanor Taylor Bland award and the 2016 Mystery Writers of America-Midwest Hugh Holton award.  She lives online at http://www.jessicaellislaine.com.

Last week’s class was held at the Law Enforcement Education Center on the campus of Hennepin Technical College in Brooklyn Park.  We’re in for another jam-packed evening, meeting with members of the Hennepin County Sheriff’s Office Community Engagement Team (CET) and representatives of the Professional Standards Division which includes Personnel and Range Instructors.

The highlight of the evening is the time we spend with the HCSO’s Range Instructors.  At the firing range, we’re given shooting vests, ear muffs, and protective eyewear.  I fuss over the eyewear because my fading eyesight is a product of old age: I’m farsighted but can’t see anything up close.  To wear glasses or not to wear glasses, that is the question.

I decide not to wear glasses.  When it’s my turn to shoot the handgun, a standard-issue Smith & Wesson M&P.40, the hunky instructor tells me to aim for the grey rectangle in the center of the person-shaped target.  Holding the gun (which is surprisingly heavy), my hands shake like FBI agent Clarice Starling’s as she follows serial killer, Jame Gumb, into that basement of horrors in The Silence of the Lambs.

While my dreams of being drafted as an elite sniper are dashed, it turns out fellow Twin Cities’ Sister in Crime member, Theresa Weir is something of a natural: all five of her shots hit within the grey rectangle.  Her sharp shooting skills lead to some friendly teasing on Facebook.  “I’ll remember not to piss you off,” one person jokes.

My aim is a little better with the rifle because it has a scope.  All of my shots hit the target’s stomach. “You all hit there,” the instructor says, taking the wind out of my sails.

After the firing range, we head over to a video simulation lab.  These video simulations are used to train new recruits and offer a variety of potentially lethal scenarios: a domestic violence call, an unusual traffic stop, and a hold up-in-progress at a convenience store.

My scenario involves the convenience store, where my partner and I point our simulation guns at the robber who faces the cash register.  We shout things at him like, “Sir, move now!  Move now!  Put your hands up!  Hands up!  Look at me! Look at me!  Look at me!  Why won’t you look at me?”  Before we can yell out anything else, the robber turns around and shoots us both dead.  Cagney and Lacey, we are not.

It’s a scary predicament, being a cop in a potentially life-threatening situation.  Some experts believe more training, especially in tactics to defuse high-stress situations, could help both officers and suspects.  A recent study conducted by the Police Executive Research Forum concluded that the majority of training hours were spent on firearms and defensive tactics rather than on de-escalation and crisis intervention.

We’ve heard several people say, “You don’t read about HCSO officers in the papers,” and it’s true, you don’t.  On average, HCSO employees receive twice as many training hours as other police departments.  Does the additional training make a difference?  It certainly can’t hurt.

The training instructors also teach the new recruits how to read the Cooper color code of the tactical (or combat) mindset.  As one instructor explains, understanding your mindset during a tactical situation can be more important than your firearm or Taser skills.  Your mindset can literally make the difference between life and death.

There are five colors in the color code:

After the video simulation, we watch a Taser demonstration. The instructors assure us that it’s very uncommon for someone to die after being Tased.    Interesting fact #2: Even people with pacemakers can be safely Tased, so grandpas beware.

I could write a boring paragraph about how a Taser works, but there’s no need since I found this awesome graphic:

Interesting fact #3: The instructors say that the worst part of being Tased is pulling the fish hooks out of your skin after the Taser is fired.  Tasers eject standard fish hooks (size six, I think).

This week, the academy will come to an end (sniff).  So far, it’s been an excellent adventure.   I’m looking forward to learning how 911 works and wrapping things up with our celebration party.